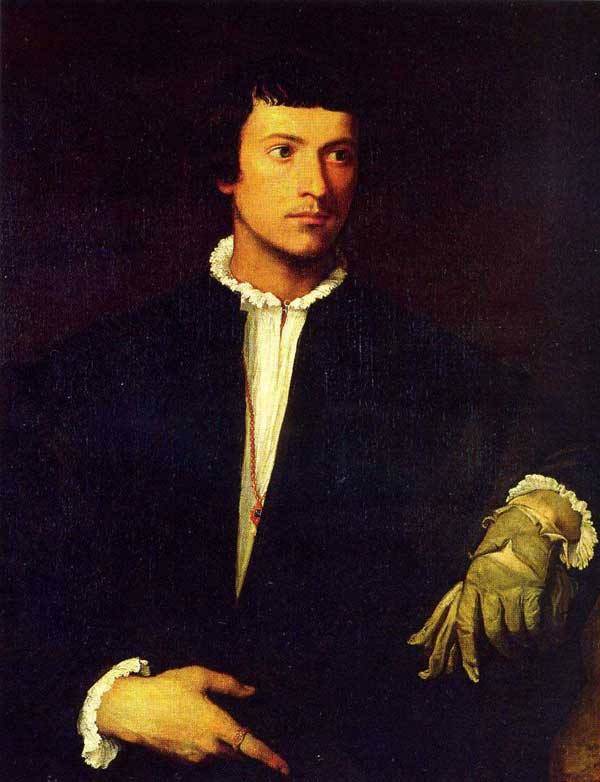 Welcome to Season 2 of  … Because History has Hotties, too … my blog on the beautiful people of the Renaissance.

Feast your eyes on “Man with a Glove.” Venetian Master Titian created this oil-on-canvas masterpiece in 1520. Today, the portrait is housed in the Louvre in Paris.

Art historians have never established the identity of the Man with a Glove. He appears to be about sixteen, a born patrician, and a study of Venetian fashion of the time: coiffured hair, black doublet, pleated white shirt, gold ring, and sapphire and pearl necklace. He’s certainly proud of his gloves, which was an accessory used by the most refined gentlemen of the time.

Even though we don’t know the subject’s name, it doesn’t matter. Titian’s famous painting is a psychological portrait. Through his dramatic use of light and dark colors, Titian tells us this man possesses an aristocratic state of mind. He is aloof and preoccupied, but also sensitive. Look at his attentive eyes.

Art historians claim that he is pointing to his calves. Though we can’t see his legs in the painting, he apparently wants us to know that he works out.

I like the portrait; however, I don’t know if I buy this business about the big calves. The kid looks pretty skinny. Plus, if his calves are as awesomely muscular as he’s claiming with that pointed finger of his, don’t you think Titian would have found a way to get his legs in the portrait?

As a former journalist, I’d call that a pretty bad case of “burying the lede.”